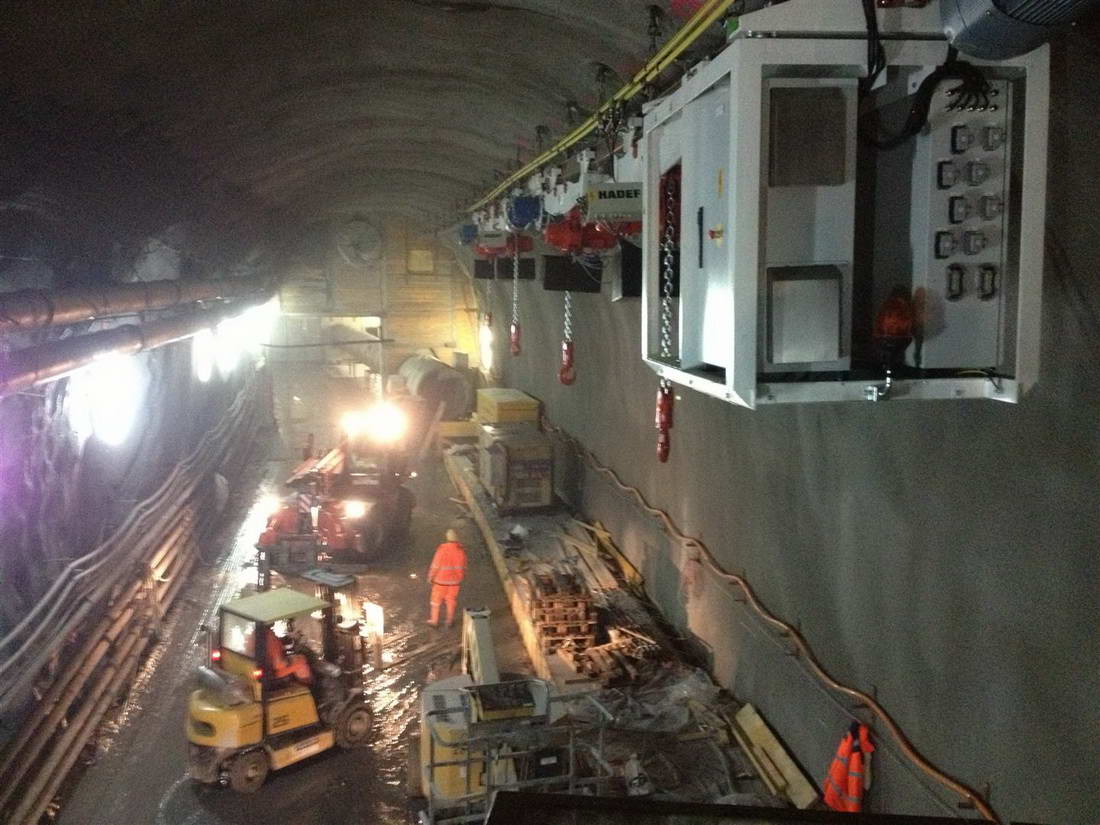 If you deal with modern hydroelectric power plants, there is no way to pass the mega-project "Linthal 2015". The Linth-Limmern power plants (KLL) are indisputably belong to those, which are superlative. This hydropower plants are equal in power with nuclear reactors, such as those in Leibstadt. Due to the difference in height of about 600m, the power plant will reach a capacity of 1480MW. Thus, the power supply in the Northeast and Central Switzerland is ensured.

For the work at site, there are also high requirements for a project like this. Thus, the only access to the site is via a specially designed cable car. All tools and materials must be transported to the site with it. There is no alternative access. The effective concept of a hovering transport has also been integrated into the construction site itself. Accordingly to the nature of a tunnel site, the space on the floor is also limited in Linth- Limmern. In order to operate a highly sophisticated and effective tunnel construction site, it is essential to carry out work processes in several places at the same time. 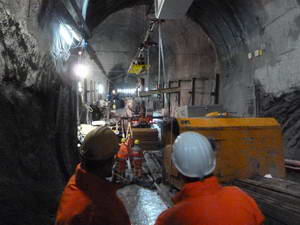 The EMZ 60 at the transhipmentThis also includes a supply of equipment and materials to the various points of the site. And that all through the same access to the tunnel, which is located at the very beginning of the construction sites. In a pressure tunnel, a floor-bound cable car was installed, which supplied the upper job sites with material. To feed this cable car continuously and without interrupts, the gear-driven overhead monorail "EMZ 60" from the company inTrak was used.

The EMZ 60 is equipped with a power of 60 kW and was completely fed via busbars. Each lifting beam could reliably lift and transport up to 17 tons. With 3 beams in use, about 50 tons of payload could be transported safely and smoothly to the corresponding sites.

Thought in the beginning only considered for the easy transport of the formwork segments it turned out quickly, that the trouble-free operation above the construction site to also perform other transports with the EMZ 60. 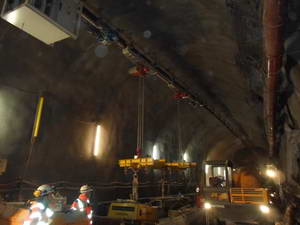 Everything that was transported with the EMZ 60 improved the safety by equalizing the concentration of machines at the floor. Not only were the wet concrete containers transported with the EMZ 60, for which otherwise 3 container trucks had to maneuver simultaneously through the construction site. Also IBC dices, reinforcing steel, mesh mats or even drum mixer and mini excavators have been reliably moved with the transport solution at the upper level. Based on the high performance of the EMZ 60, at a later stage the monorails were extended to the pressure tunnel. With its 60kW and gear drive, the EMZ was able to get the materials in position in the 24° inclining pressure tunnel to hand them over there for further transport. This allowed the removing the "station" for the floorbound cable car from the cavern. This equalized and facilitated the construction work again.

If you not change browser settings, you agree to it. Learn more

Our strong partner in the international tunneling and mining